How To Escape The Friend Zone (And Get Out Fast!) 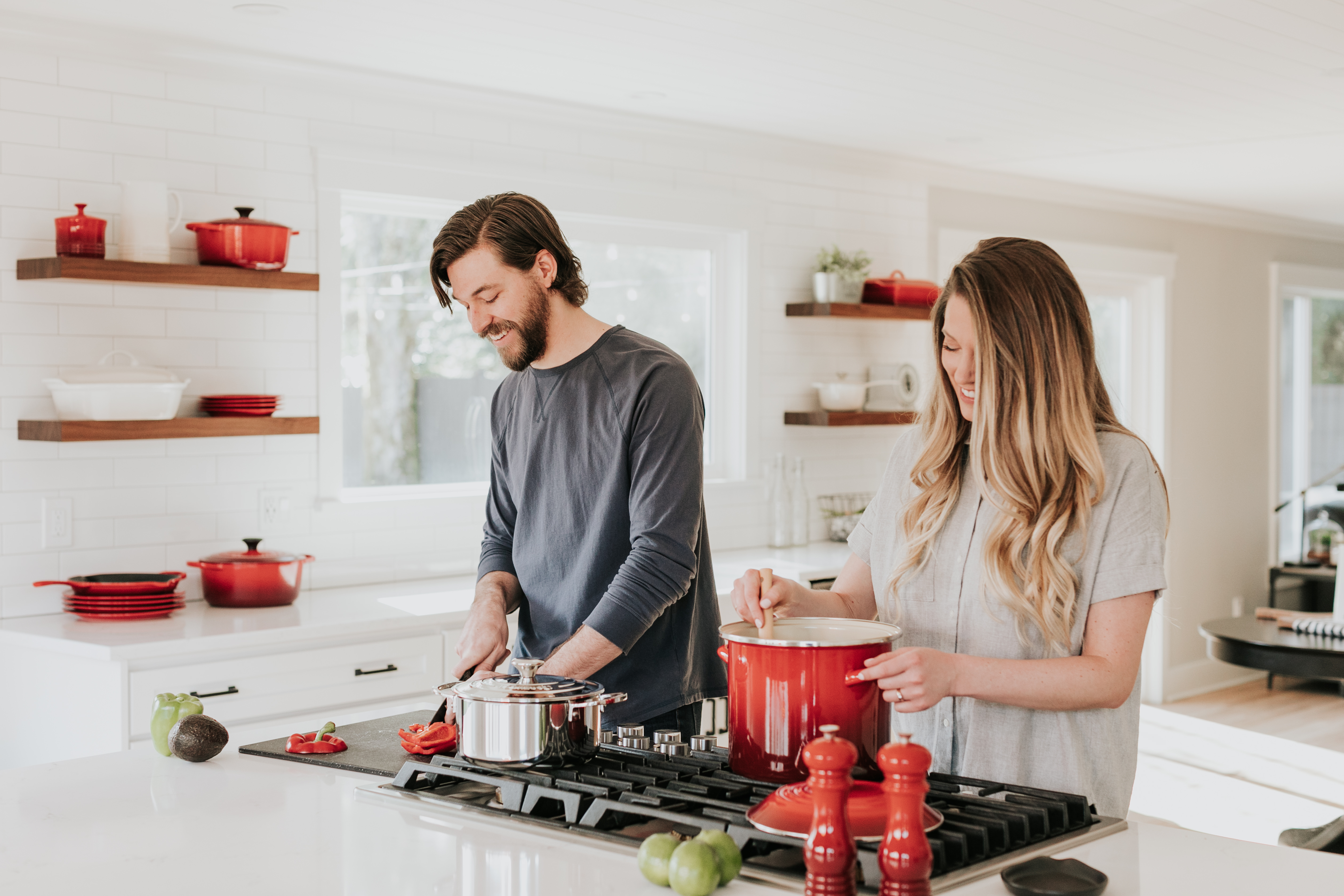 If you’re a fan of TV sitcoms, then chances are you’ve seen a popular relationship dynamic play out on your screen: a guy and girl who end up as best friends.

Sometimes, in cases like Cory and Topanga from Boy Meets World, friendship eventually leads to something more — like a lifetime of endless love. Other times, like in the case of Landry Clarke on Friday Night Lights, the label of “guy friend” seems impossible ever to escape.

Of course, we’ve come up with a term to explain this all too common phenomenon of a man and woman who end up being besties: It’s called the friend zone.

But what does being in “the friend zone” really look like? And if you’re a guy who loves the girl, how can you end up more like Cory Matthews and less like Landry Clarke? Because, let’s be real, being friends with a girl is great, but it’s not usually what guys really want, is it?

What is the friend zone?

According to Urban Dictionary, ending up in the friend zone means that a girl sees you more like a brother than a potential love interest. In other words, the friend zone is a place where men end up when a woman only holds platonic feelings for him.

If you think back to those ‘90s television sitcoms, then you probably picture the goofy, awkward paleontologist from the show Friends, Ross Geller, when you hear the term “friend zone.” After all, Ross worshiped Rachel for much of the series — but she never saw him as more than a sweet friend.

Men can end up in the friend zone for a ton of different reasons. Sometimes the timing is just off and you meet the woman of your dreams while she’s seeing someone else. Other times there may not be mutual attraction, and she simply doesn’t feel the same way you do.

Regardless of the reasons why you landed in the friend zone, the reality is that it never feels good. After all, your emotional (and more than likely sexual) needs aren’t being met when she only sees you as a friend.

Before you can remedy this situation, though, you need to understand the signs that you’re officially in the friend zone. Then you need the tools to help you dig yourself out.

How to tell if you're in it

You may be living in denial, but chances are if you’re reading this article, you already know that you’re in the friend zone. You probably feel it in every interaction you have with the girl you’re crushing on. And honestly? It probably stings.

If you aren’t sure exactly where you stand with your gal, though, here are some ways to tell that you’re in the dreaded friend zone:

Reason #1:  She turns your “dates” into group events.

Although group dates are fun from time to time, when a girl is interested in dating someone, she looks for opportunities to spend some time alone with the guy so she can see if there’s a connection.

If she only sees you as a friend, though, chances are she will have no problem inviting mutual friends to join you guys for dinner or turning your romantic day at the beach into a volleyball event.

In the early stages of a relationship, there’s usually some flirtatious banter and mild physical contact. If you hang out with your gal frequently and she never reaches out to rub your back or hold your hand, then chances are she doesn’t see you as anything more than a friend.

Women usually put their best foot forward when they’re trying to impress a guy. In fact, most girls make sure their makeup and hair looks its best anytime they know they will see the guy they’re crushing on.

With male friends, though, girls usually have no problem burping or wearing sweats. So if you’ve ever watched Netflix in sweats or chugged beers together and had a belching contest, chances are you’re definitely in the friend zone.

Reason #4:  She's trying to set you up with others

Girls love to play matchmaker for their friends — regardless of their gender. They would never pawn you off on someone else if they had feelings, though, so chances are she only sees you as a friend if she’s trying to kick your Tinder profile up a notch or hook you up with a friend.

Reason #5:  Her best friends know almost nothing about you

When you’re into someone, you jump at the chance to talk about them because, well, they’re always on your mind. Girls love to gossip, too, so if her besties don’t know much about you and she’s not giving them the scoop on all of your conversations, then you’re just in the friend zone.

How do you escape the friend zone?

When you find out that you’re in the friend zone, your initial reaction is probably to pull one of those classic Ross Geller moves and try to pull off some grand gesture or do even more to show the woman in your life just how committed you are to making her happy.

However, social worker and relationship expert Jeremy Nicholson says that you actually want to do the exact opposite.

In fact, he explains through a series of articles on Psychology Today that relationships aren’t about showing someone how much you care, but instead involve lots and lots of negotiation.

Instead of giving yourself entirely to someone, you want to make sure that the scales remain balanced.

To start, make sure you’re not too clingy. Desperation isn’t attractive, and in many cases it scares people away during the early stages of a relationship. It also takes away nearly all of your power because you’re the one bending over backwards for her attention.

Instead, it’s best to take a step back and let her come to you. And, if she doesn’t express interest, then be ready to walk away before you get stuck in the painful spot of “just a friend” for the rest of your life.

Also, make sure she sees that there’s some competition for your heart. You don’t want to look like a player, of course, but having a few other (attractive) female friends absolutely will not hurt your chances of getting her to see you as more than just a friend.

Studies show that people value things that they may lose more than something that’s “always available,” so by creating a little jealousy and expanding your social network, you just may turn your friend zone situationship into a real romantic relationship in a short amount of time.

Finally, you need to ask the girl you want for favors so you can see if she’s willing to invest. The more someone gives and invests in the relationship, the more they see you as an important part of their life.

This also lets you reward them for their efforts, which creates an environment of mutual gratitude, which is a key to a healthy romantic relationship.

How to go from friendship to boyfriend fast?

Most men land in the friend zone because they never really seize the opportunity to be anything more.

While that’s not to say you should go and serenade her at her bedroom window and make a scene, you do need to make a concerted effort to show her that you’re worthy of the boyfriend's title.

Be bold; ask her on a date and explain your intentions upfront. This takes the guesswork out of the situation for her and lets her know that you are genuinely interested in taking things up a notch past the current friendship that you share.

Don’t just stop there, though: Make sure you also put effort into impressing her so that she sees you mean business. Put effort into your appearance and take the needed steps to make yourself both physically and psychologically attractive so that she can’t resist you.

And, of course, use your knowledge from the friendship to show her that you care and remember the small details about her because your feelings run deep.

While there’s tons of information in this article to help you win over your female friend, you also need to keep things in perspective.

In the same way, Rachel never saw Ross as more than a friend, there are some instances where your female companion may never be romantically interested in you no matter how hard you try.

In fact, relationship writer Emma Austin shares that several signs indicate that a woman just isn’t romantically interested in you. These signs include:

However, don’t completely write her off or think that she doesn’t care. In fact, if she hasn’t outright rejected you, chances are it’s just the opposite — she probably cares about you deeply and doesn’t want to break your heart by rejecting your obvious romantic advances.

While the friend zone definitely never feels like a great place to be, remember that it feels that way for everyone, not just you.

But whether you landed in the friend zone recently or you’ve been there for quite a while, don’t feel like you’re doomed to stay there forever (unless you’re Ross).

By putting forth some initiative and not shying away from uncomfortable conversations, you can test the waters and climb your way out of the friend zone with some effort and a fresh approach.

If you put yourself out there and manage to land a date, congrats!

If not, though, remember that sometimes things just don’t work out — and although it hurts, it’s not the end of the world.

Eventually you will find the woman out there who’s meant to be with you, a woman who will give you all that you deserve and show you the love that you’ve always dreamed of… even if she starts out as “just a friend.”