Reviewing Magnetic Messaging System: Is This Program Worth It?

We've rated the following 4 categories below based on our in-depth research to compare similar products and systems.

There’s hardly a more significant blow to your ego then getting to know a girl, receiving her number, and not getting any responses to your texts.

You might wonder if there’s a bad connection, but you’ll eventually have the face reality: something about your texts weren’t working.

You don’t want to be the guy blowing up her phone either, as that makes you look annoying and desperate. To get off on the right foot, use a program like Magnetic Messaging.

With Magnetic Messaging, you can learn how to send texts that make a woman eager to respond to you.

Its been designed to help different guys with different texting and relationship needs. Here's the rundown on this program. 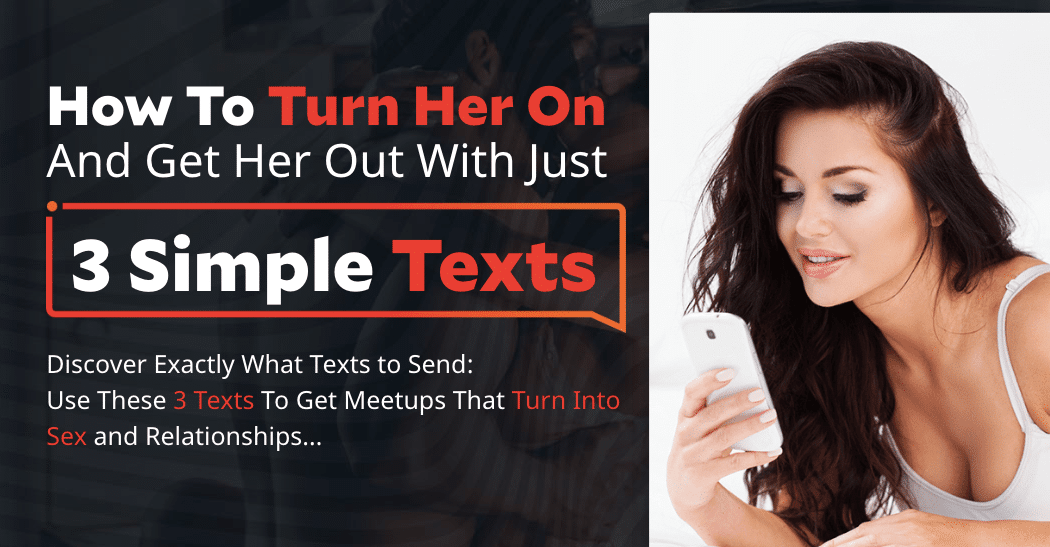 Communicating through text is different than face-to-face or even over the phone, but it shouldn’t be seen as inherently impersonal.

You’ve surely had conversations where you and a girl you like were regularly sending messages back and forth, and you were eager for every response.

You can’t force chemistry via texts, but you can build off existing passion and intrigue to mine further potential.

Magnetic Messaging is an eBook that gives you concrete advice through the help of experts Bobby Rio and Rob Judge.

There are different aspects of Magnetic Messaging that we’ll tell you all about here.

The Magnetic Messaging creators have dubbed a crucial part of the courtship process as the “phone game.”

Between introducing yourself and going out with her, you need to make good use of your mobile device.

Unfortunately, it’s easy to treat this part of the process as an afterthought.

Guys who are used to moderate text conversations may have trouble adjusting to one that requires actual involvement.

You might not be the only guy texting the girl you like, and it would be hard to blame her for choosing a guy with more pizazz.

You don’t need to be someone you’re not in order to attract a girl.

Magnetic Messaging helps you to work with the tools currently at your disposal to create texts that are involving but that are also yours.

A major way you can blow things is by being too passive with setting up dates.

Sending that text is scary, but you can’t just drag on a conversation until she's grown sick of you.

Rio and Judge want you to cut to the chase. They advise you to send a maximum of two messages and then suggest a date.

The initial conversation might go on longer than that, but as long as your focus is on getting the date going, you’ll be in good shape.

When you get that first urge to message her, act upon it.

There’s no physical timer that will go off if you don’t arrange a date soon enough, but you should still be keeping the pressure on yourself as if there is.

Magnetic Messaging helps to keep you disciplined and make your messages just right.

With Magnetic Messaging’s Key-Lock Sequence, you can avoid the pitfalls that come with texting wishy-washiness, as that can quickly get your in the friend zone.

You need to jump on any openings you have.

The three ways to do this are: spark emotions, make connections, handle logistics.

You’ll regularly see these brought up in this eBook.

There can be times when a conversation doesn’t ignite, but you don’t need to give up.

You’ll get advice that instructs you on how to make conversations that might’ve seemed dead in the water into rejuvenated ones.

Sometimes, it’s hard to distinguish who’s playing “hard to get” and who is genuinely uninterested in you.

However, Rio and Judge promote keeping your spirits up and not folding at the first sign of trouble.

You shouldn’t be trying to girls into liking you. That’s pretty much impossible, and it’s very creepy behavior.

Instead, Magnetic Messaging teaches you how to use being nonchalant to your advantage.

You’ll look far more attractive when it becomes clear that your self-worth is not dependent on if this particular girl is into you.

You’ll still need to be engaged by sending her messages, and the eBook gives you excellent guidance on this.

Some girls might be very attracted to you, but they want to string you along a little first.

Let them see that you’re just as capable of playing games.

Getting that first date is a major accomplishment, and it’s great to be going steady with a girl you like, but being able to go from casual to official isn’t a two-step process.

You should never take a relationship for granted, but it’s especially important not to do so in the early stages of a relationship.

The first date is an all-important part of a relationship.

Even the most prepared and confident people can go into these and feel nervous, because you’re basically showing yourself as what you think is your best.

However, this might not be the self that most attracts girls.

With Magnetic Messaging’s confirmation test, you’ll figure out the best ways to put your date at ease and help her enjoy the experience, as well as yourself.

Having sex with her can make it feel like you’ve done everything you need to and that you just need to wait for her to make it official on social media.

But sex can complicate things, especially with creating uncertainty about where you stand in your relationship.

A question can arise, such as, “Does he like me for me, or for the sex?”

The texts you send following sex are among the most important you’ll ever send.

In the eBook, the authors teach you about using texts to create further intimacy and arousal.

It shows you how to be a true gentleman, which should never be overlooked.

When your relationship is confirmed, you might think that the pressure is off in terms of texting.

That’s definitely not right, because falling into a pattern of boring texting opens the opportunity for another guy to swoop in.

You shouldn’t be doing anything halfheartedly, especially not in a relationship.

This part of the eBook teaches you how you can keep up the texting expertise even when things are official.

You’ll learn about ways you can keep your messaging and your relationship fresh.

It’s a surefire way to keep things interesting, but you need to make sure you’re actually trying.

The first time you exchange raunchy texts or photos with her can be incredibly exciting, even if you’ve done it with plenty of girls before.

If you’re nervous about asking, you’ll learn ways you can reduce awkwardness. She might really want to send you some or even ask you, but may feel shy as well.

You can learn how to take charge and get both of your hearts pumping.

What's Included in the Program? 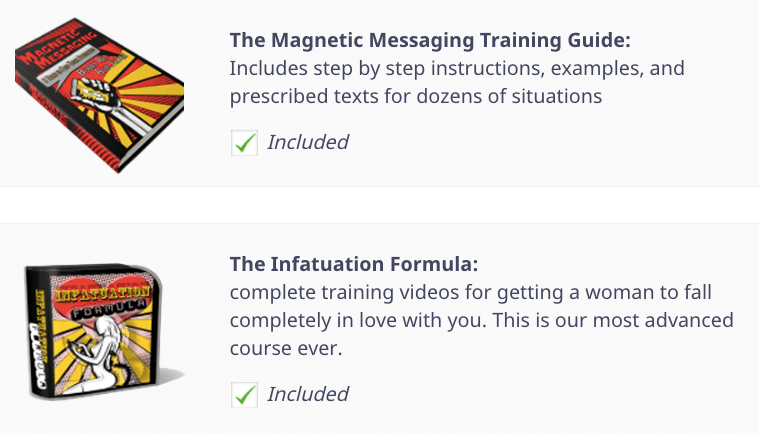 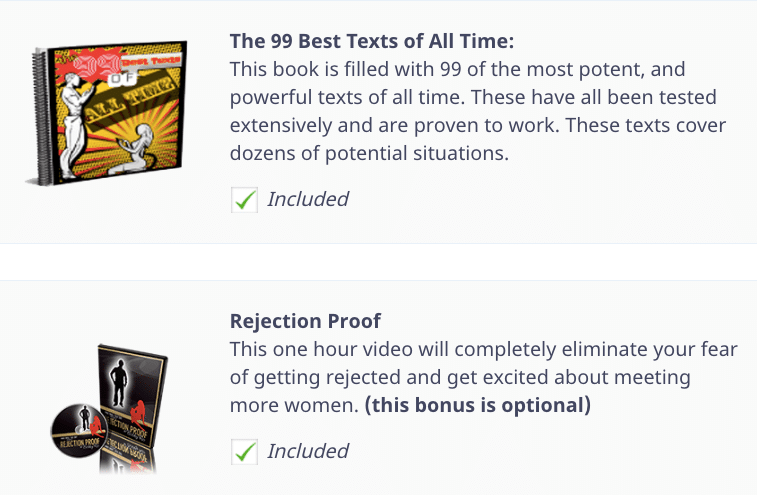 If you’re tired of sending texts to girls you’re interested in, but you’re not getting anywhere, you need to change things.

Getting outside of your head and listening to the advice of others is a significant sign of maturity.

Magnetic Messaging doesn’t require you to change everything about how you text.

It just requires some general maintenance. You should see the reasoning behind much of their advice.

Ask yourself what you really have to lose if you go through with this.

It’s unlikely that you hold your texting history so close to your heart that you would shun anything that would change it.

With attraction on the line, now is the time to really make something out of yourself and your texts.